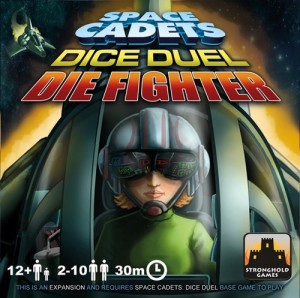 Die Fighter is an extension for the great frantic roll of the dice game Space Cadets Dice Duel. It comprises two modules:

We wondered what could serve some cabalistic signs on some of the faces of the dices, we have the answer!  Early in the game, each team drafts two techno cards among the 27 available. These techs can give some bonus on weapons, movement, …  The required dice’s “cabalistic” face have to be put on the tech cards to get his benefit.

It is not essential but gives some variety to to the game and provide additional opportunities.

This is the great idea of this extension that makes it essential for any fan of this game: the two fighters. The particularity of these two fighters is that they can be managed by themselves. Indeed, in the basic game players intend to drive a big ship requiring at least two players to lead.  2 players to drive a vessel, 2 vessels clash, do the math: we could play Space Cadets Dice Duel at least with 4 players. With two fighters, each led by a single player, you can enjoy a game with 2 players. And it’s fun! The 2-players game is just as frantic, always simulates both space flight and gives the same feeling as the game at 4.  However, it is slightly less exciting than with 4 because the fighters can do less thing (no crop of crystals) and there is less interaction between players of the same team, logical 🙂

But that’s not all! You can play with more than 2 fighters too! And yes, from 6 players, you can use the four vessels: the two large vessels controlled by two players each and two fighters piloted by one player each. We then have a team composed of 3 players controlling 1 large ship and 1 fighter against the other team of 3. The fighters are more mobile but much easier to kill because they have no shield.  In addition, if they want to damage the opponent’s big ship, it will be much harder for them as a single torpedo is not enough and the shields of the large vessels are more resistant to small rockets.  However, the fighters, by playing well at the right time, can be decisive.  In addition, they can reborn from their ashes and can return to play after being destroyed.  Hence, the player who leads the fighter will always stay in the game.  This game with the fighters is truly epic at 6 or more and offers a real plus to the game. But we have to be 6! 🙂

The material of this extension is very good and I salute the publishing work of Stronghold Games who has boxed 27 cards and 2 tech fighters with their specific board and all the extra dice necessary to fly. I want to salute it because I reported the opposite for the box of the excellent extension of Core Worlds Gallactic Orders: the box was too big for the materials it contains 🙂

However, it is unfortunate that there is not a third fighters because now, the game can be played from 2 to 10 players with the exception of three players.  But I can understand adding all the necessary equipment of a third fighter can increase too much the price of the extension. And it is true that if you like this game so much as I do, it would have been even better to have four fighters because we could then play Space Cadets Dice Duel with 4 players, each for himself. Wow!  But in fact, nothing prevents us to buy 2 boxes of this extension! 🙂  Well, it is obviously expensive but the fans do not count 🙂

The Die Fighter extension, thanks mainly to the two fighters, brings a real plus to the game because it allows to be played with 2 players providing the same feeling.  Die Fighters especially adds a large dose of fun to the basic game for the games with 6, 8 or 10 players and therefore, is essential.

We played at Space Cadets Duel and its extension Die Fighters both SwatSh and myself, two players. We both then had one fighter each with the sole objective to throw torpedo’s to each other. So here we were throwing dices frantically! The outcome came after only … 6 minutes of play: one fighter is gone in the dark ness of the Galaxy with 3 torpedo’s in its damaged body. The left opponents is lucky to stay alive with 2 torpedo’s having damaged most of his ship. That is the reason he managed to reach back his own base with so much difficulties 😉

Compared with the base game, my opinion, is that there is not a big difference except that it is a bit easier to manage. Which seems logical since there is only one guy managing the ship: piloting, firing, protecting. Probably for the same reason, there is less tension in the play of the game: indeed, you don’t yell at your partner for a 5 and not a 4 or to throw dice faster or because he made « nonsense » with his movement planification, leaving the opponent behind us!