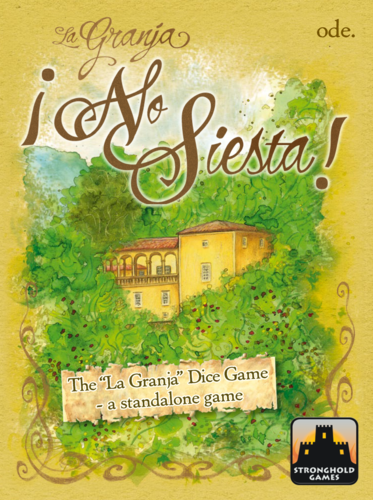 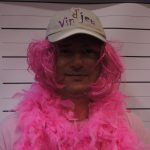 Andreas Odendahl (Ode), the designer of La Granja, propose us the dice version of his very good game.

We can find a lot of elements of La Granja in this dice version: First of all the theme, the caps, the roof of our farm and all the animals & legumes.  We lose the cards mechanism with all their different functionalities.  Otherwise, we gain a new dice mechanism.

The 6 sides of a dice represent the same 6 resources.  When a player takes a dice, he takes the represented resource.  And this is where the genius of Ode speaks.  As you roll and often reroll the dices, it is very rare that you are not satisfied with the outcome of the dice roll.  Moreover, No Siesta is perfectly balanced so that a resource is worth another. La Granja No Siesta is one of the only dice games where we not complain about the results of the dice rolls!

The rest of the game is more classic. With the acquired resources, we will fill in our personal plateau that represents his farm on a paper. We will check on the sheet the received resources depending on where you want to spend them: 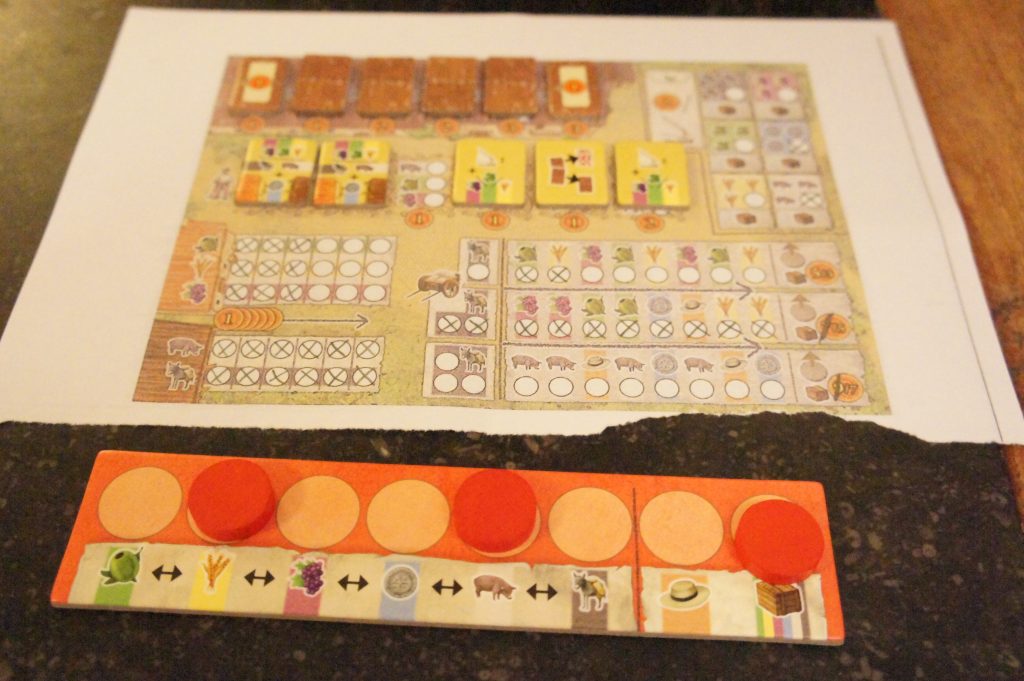 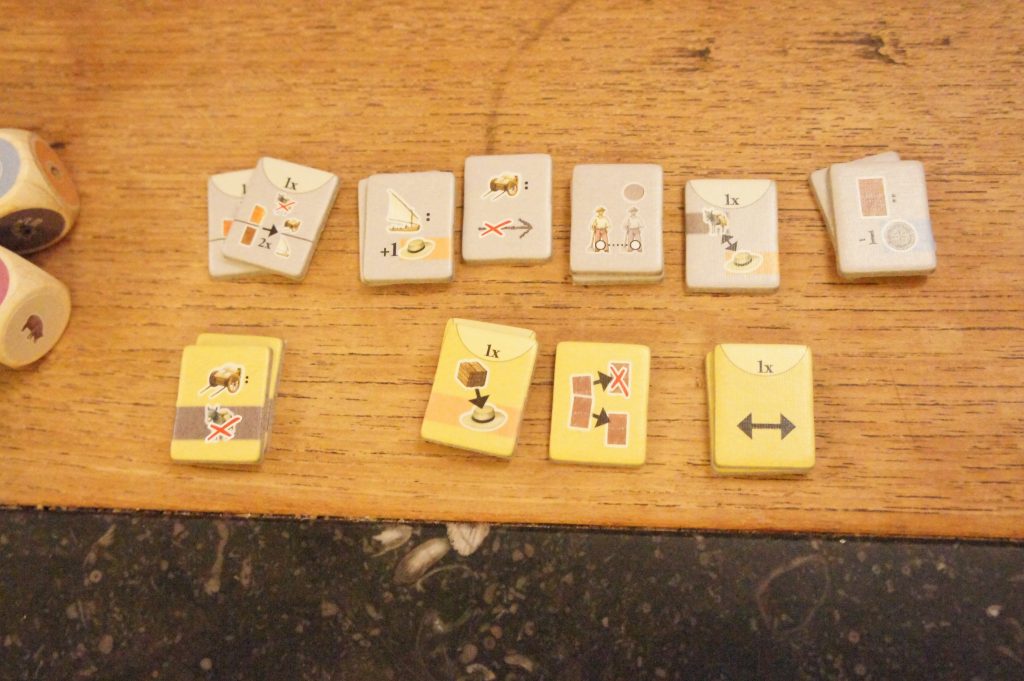 The majority of your choice in La Granja No Siesta will be during the first rounds where you are going to hire some helpers that will influence the strategy you will follow the rest of the game. Once the strategy chosen, the rest of the game is very. Players who will be in the race of the carts will enjoy a little more in their race. The games will not be very different because once the few different strategies chosen, the games will look like the others. The different locations of the farm where you can spend your resources are perfectly balanced.  It allows you to always find an effective solution to spend the resources produced by the dice. No Siesta is ideal to use as an introduction to La Granja 🙂 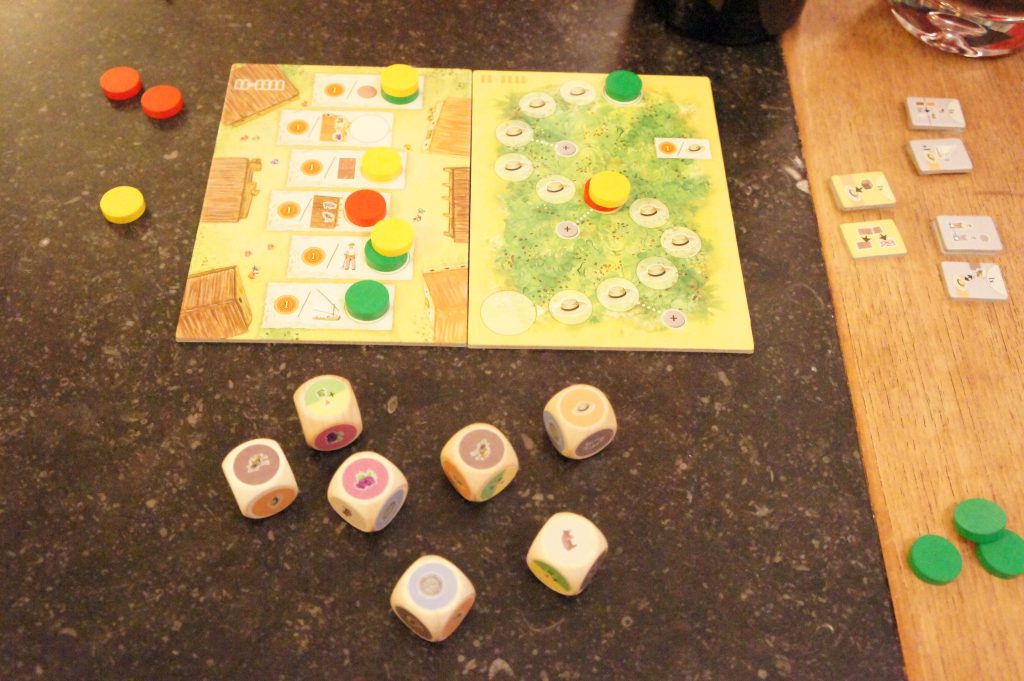 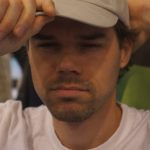 Good news today, this review of La Granja No Siesta will give us the opportunity to understand the creative process of the authors, those wonderful wizards full of imagination and new ideas, those creators of original concepts, always renewed. Let’s hear from them:

And here we go, you now know a little bit more about the incredible creative explosion happening in the heads of our gaming geniuses!

In La Granja No Siesta we therefore remain in a familiar environment: you are going to manage your farm, collect some goods, develop your farm, deliver your goods…

Of course you have a few differences: dices are not actions to be realized following their results but instead resources you collect immediatly (but the process to choose the dices remain the same). Your farm is represented by a sheet on which you will write the resources you collect and use. And the actions are different. But at the end the feeling is roughly the same: optimization of your game. Many different ways of scoring points. And all this in your nice little farm, with nice little pigs, nice little wheats, nice little olives… 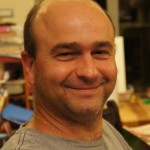 Cool, here is a game that encourages you you to take a rest. This version of La Granja has the same themse as the original game, but it’s based on dices.  The complexity is thus slightly lower.

The material is nice and the box is small, making it ideal for you next travels.

The player turn is organised in 2 main phases.  This first phase is for acquiring resources thanks to the dices.  The second phase is for using the acquired resources in different places in your farm.  All the different possibilities are quite well balanced : choices are difficult !

In thr first turns, you must engage helpers that will facilitates the development in one or another place in your farm.  These helpers will give the direction for your strategy for the rest of the game.  It’s difficult to change the strategy later …

The interaction between players is too limited : it’s mainly in the choice of the dices, and when placing tokens at the market (places are limited !)

La Granja – La Siesta is thus a small and enjoyable game.  Nothing really new, but for the limited price, you will have a good time ! 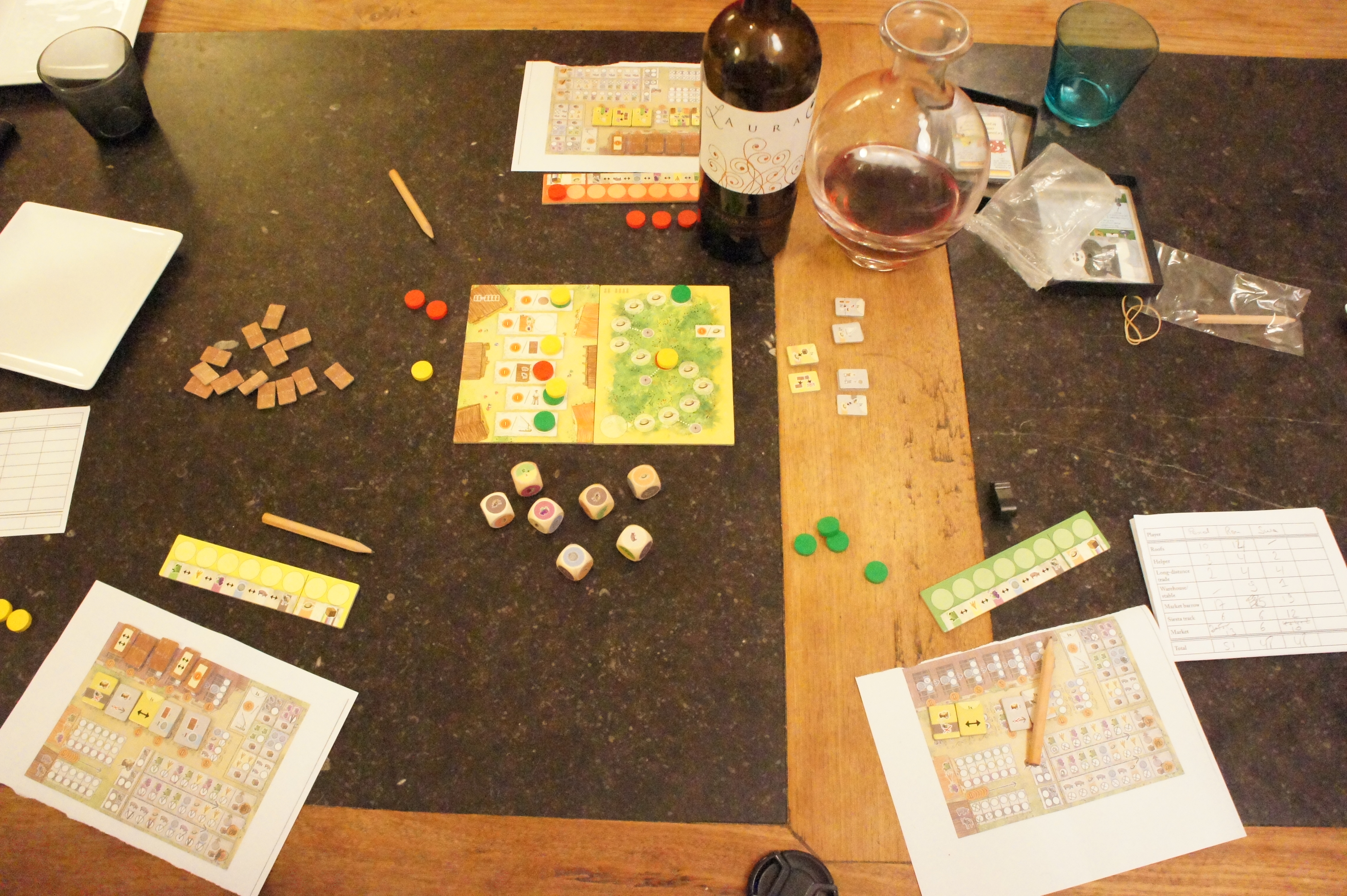 Vin d’jeu d’video: the degustation in 4 minutes of No Siesta with Ren